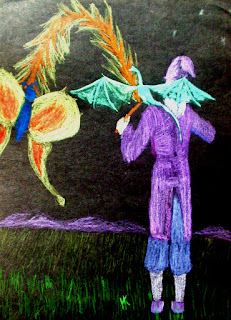 My first published works were as co-author on Allan's Para-Earth books, where I've helped with character interactions, the science behind the stories, and dialogue on the first two, and for the third and fourth wrote part of them myself. I insisted that there be a science fiction grounding for the monsters, because I found such monsters scarier, being potentially real, whereas the supernatural creatures never really scared me.

Yet here I am, writing my own, and my love of fantasy has resurfaced and my detective has to deal with supernatural problems. Some of my friends don't like horror, and originally I assured them that it wouldn't be too scary-- but then I found out that one friend considers Harry Dresden too much of a horror story (a wizard detective in urban fantasy), and I had to tell her not to read my books.

So what genre am I in? I consider Rafael Jones to be primarily in the detective novel category, sometimes being true mystery, sometimes more pulp fiction adventure. Yet the supernatural elements will be strong in every story. His base is in New York City, making urban fantasy a good description. Whether it should be considered to cross into horror depends, I guess, on what you think horror is. I don't feel it is that, myself, because the books are hopeful, philosophical, and funny. But when there's murder, there's an element of horror.

One of my beta readers said she felt like she was reading a Philip Marlowe story, only to have it twist into Kolchak: The Nightstalker. I wonder what you will find in my writing...
at April 07, 2019