Most of the time, when writing, I'd create a character and then think about who could play them. Oddly enough, this time, I've often chosen the player first, or part way through, and it influences how I write them.


I'd been wanting to write a classic-style P.I. for a long time, but I never felt like I had a satisfactory plan. Part of it was coming up with a good plot, but I see now that I was seeking something special to define my detective. Then when I was watching Star Wars, I started thinking "That guy doing Poe Dameron would be great as the wisecracking P.I.-- he can do sass, compassion, action". I realized most of the traditional P.I.s were very much white men, and Oscar Isaac was a little more exotic looking. A non-white P.I. in the 40s would  be a reason to include some parts of history often overlooked. I decided to give him a white father for access to more opportunities, but his mother would be Guatemalan. Her Mayan heritage and  other folklore knowledge would link him in with supernatural influences he doesn't yet know about.

A lot of pitches in Hollywood start with, "The part was made for you!" But in this case, it's literal. Writing a Latino detective isn't just a way to give myself a different take on the archetype and explore avenues of history... I also feel like he's had a solid career with a lot of interesting roles, but never that breakout role in the blockbuster movie that makes someone a "star".I'd like him to have that opportunity, and a lead in a visually rich, period, action movie seems like a good chance.


Of course, you can't have film noir without a love interest, or maybe a triangle. So, there's a beautiful, charming client-- but I pictured my detective as being rather pro-woman (there are too many misogynists in fiction from the time), so I wanted to have Clara Thomas be his equal. Less experienced in some aspects of the work, but more in others. Hayley Atwell, who played Peggy Carter, would be perfect for the role. (One of my beta readers definitely recognized her from the descriptions and the action!)

Eugene was harder. He's tall, good-looking, and fair complected, something like this 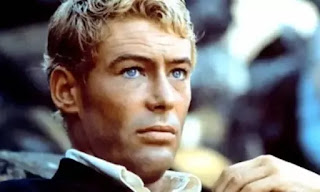 but as I wrote him, his voice sounded like John Astin. The voice was enough to tell me how I saw the lines delivered. The look can be found.


Cate Blanchett fits my image of Yekaterina well, although I didn't know it until after I wrote it.

The main baddy is, of course, based on someone not an actor. I did watch Christopher Lee's take on the character (no not Dracula), though, and that may have had some influence. I wonder if Keanu Reeves would want to try it.