What you write, vs. what you mean to write.

I didn't write a horror book. At least, I didn't think I did. I wrote a detective novel... with elements of supernatural danger. 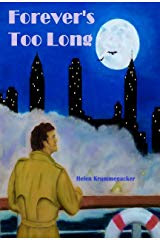 But... while there was some scary scenes, the overall tone, I felt, was too optimistic to be horror. It was an adventure tale. A friend said she couldn't read scary tales when I was writing it. At first I told her she'd need to skip a chapter and I'd give her a synopsis. Maybe two. Then she said Harry Dresden books were too scary for her. I told her to forget it. And I didn't hold back when it came to the creep factor if I had a good idea to build the tension somewhere.

But it was not a horror story. I'd written horror before, short stories. Those were grim. Forever's Too Long wasn't grim. It was full of friendship and love, music and kindness. Levity was sprinkled throughout.

A coworker refused to read it on the grounds of she didn't read scary stuff.

I rethought how I'd been looking at it. It was an adventure, yes, and a tale of friendship and love, but couldn't you say the same about Dracula, which authentically was about Johnathan struggling to get to Mina, Mina resisting the call of the vampires, and friends coming together to fight the undead monster who had killed an innocent among them. You couldn't call one of the classics of horror not horror just because it had a happy ending. And the creepy stuff was creepy enough I couldn't push it on someone who couldn't stand anything mildly scary.

So, I sent a copy to a friend who reviews horror. I'll see whether she thinks it's horror or not. 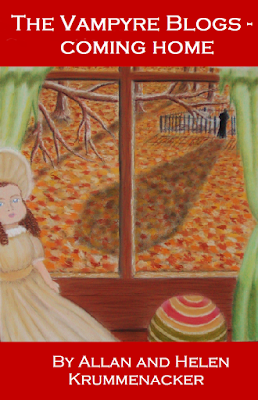 
When Allan got the idea for The Vampyre Blogs: Coming Home, he wanted to write the story of a man who was changed by an encounter with a creature from a parallel Earth. In the Para-Earth series, infinite, or nearly so,  timelines exist and in some Earth exists, but evolution happened differently. In this case a kind of intelligent slime-mold formed a symbiotic relationship with the man blown into it's universe. And although he gets home, he finds that as a result of the bonding he is to all intent a living vampire, with a very prolonged life. Yet over a century later, he must deal with a monster from that same universe which found its way into his world. I'm a co-author on that series, because, although Allan does the majority of the actual writing, I've done such extensive work with him on the science aspects, creature development, and character interactions, he sees me as co-creator.

Allan wanted to introduce him to the audience through the eyes of two teen girls, one who had known him since her earliest days, and another meeting him for the first time. A lot of the story revolves around them.

Over a year after it was released, a friend pointed out to him that he'd written a young adult novel. He re-read it and yes... the teens were really the ones with the most important story arcs, as they underwent more personal growth in that frame.

Okay, so he'd written a young adult novel and it was obvious once someone else said it.
at June 29, 2019